03 May A Primal Primer: Lymphatic Health 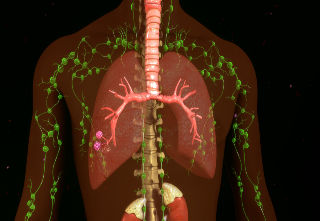 I get more questions these days about lymphatic health—particularly lymphedema. Sometimes it’s an issue related to a reader’s cancer recovery or a co-occurring symptom seen with a loved one’s other health concerns. While I might take up specific conditions in future posts (let me know if you have suggestions there), I thought I’d spend today taking apart the basics of lymphatic health. As with many of the body’s core operating functions, the real story often gets camouflaged within vague, consumer-based terms that end up being only medically tangential. Consider today’s post a trip into the weeds and (maybe) the beginning of an ongoing conversation on the topic.

In essence, the lymphatic system is the body’s filtration system, helping to sample incoming substances, filter out waste products from cells, regulate fluid homeostasis, and prime the immune system for action when a threat is located. Central to the entire system is the transportation of lymph, a clear fluid that stores and transports white blood cells, proteins, salts, glucose, bacteria and certain waste products.

Lymphatic vessels perform a similar role to the blood circulatory system, carrying lymph to virtually all areas of the body other than bone marrow.  Unlike the blood system, however, a series of valves force lymph to travel in just one direction, taking it ever-upward towards the neck, whereupon it re-enters the venous circulatory system. New lymph is formed when specialized lymphatic capillaries allow soluble materials and cells to court their way back into the lymphatic vessels.

Lymphatic vessels are connected to lymph organs. These organs are where the lymph is filtered and lymphocyte is created—arguably where most of the exciting action happens.

Red bone marrow and the thymus gland are considered the primary lymphoid organs and act as incubators for maturation of lymphocytes—a type of white blood cell. As these lymphocytes get older, they’re sent into the lymphatic vessels to hunt down and attacking infected or cancerous cells.

Secondary lymphoid organs, which include the lymph nodes, tonsils and spleen, act as traps for incoming pathogens, whereupon foreign bodies are set upon by mature lymphocytes.

Your Lymphatic System In Action

Up until quite recently, the lymphatic system was considered secondary to the blood circulatory system. A series of groundbreaking discoveries in the 90s changed all this, and we’ve been learning since.

For one, the lymphatic system plays a key part in our adaptive immunity. Antigens that make their way into the body or develop within our cells are recognized primarily by the lymphocytes produced by the thymus and bone marrow, or picked up as they pass through the secondary lymphatic organs. Upon detection of the antigen, the lymphatic system initiates a immunological cascade that activates or produces more and more lymphocytes to wipe out the threat. Lymph nodes and other secondary lymphatic organs are strategically located around the body where they are well placed to sample incoming materials and intercept potential threats.

Beyond immunity, there’s the equally important fluid homeostasis role that the lymphatic system plays. Lymphatic vessels act as conduits, allowing surrounding tissues to expel or absorb fluid in order to maintain homeostasis and prevent excess swelling. Recent research has even discovered an element of the lymphatic system devoted to draining interstitial fluid from in and around the brain, thereby exhibiting a critical function in alleviating pressure in the CNS.

It’s all well and good when the lymphatic system is doing what it ought to, but lymphatic disruption can portend unfortunate news for your health: compromised immune function and lymphedema for starters.

Like any system within the body, factors like chronic inflammation, lifestyle choices, and toxin exposure can all place stress on the lymphatic system. Problems often occur when the flow of lymph is disrupted, whether with systemic inflammation or localized swelling at the nodes and vessels, whereby the entire system can become compromised as it relies on that constant movement of lymph to do its job.

And then there’s the fact that the lymphatic system acts as a sort of microbiological conveyor belt—fundamentally useful when antibodies can be released in a timely and efficient fashion to dispatch any antigens, but highly problematic when the system is overwhelmed or overrun. In these scenarios, the lymphatic system can quickly become a means by which infection can rapidly disseminate throughout the body.

Common diseases associated with the lymphatic system include:

There’s plenty more where that came from, but it’s fair to say that if your lymphatic system is ailing, your health in general will be lacking.

I’ve periodically shared my thoughts on the most anti-inflammatory foods, so be sure to check out the likes of this post if you’re not already familiar. Foods like wild fish oil/fat, berries, turmeric and pastured animal fat have all been shown to significantly lower chronic inflammation patterns. One interesting case study showed that MCT oil along with fat soluble vitamins helped to improve symptoms of intestinal lymphangiectasia.

Aside from anti-inflammatory foods, there’s the usual lifestyle choices that can make or break an anti-inflammatory way of life: getting plenty of sleep, regular (but not excessive) exercise, and avoiding chronic stress wherever possible.

Whereas the blood circulatory system is propelled by the pump-like workings of the heart, our lymphatic system relies on the contraction and relaxation of a complex series of smaller muscles to keep lymph continually flowing. While lymphatic vessels are equipped with their very own smooth muscle cells, research shows that “outer” forces such as skeletal muscle motion help to maintain healthy lymphatic flow.

Logically-speaking, the more movement you get, the better off your lymphatic system should be—and the literature seems to support this notion. A 2012 literature review concluded that exercise is an effective therapy for the treatment of lymphedema, while a considerable number of other studies indicate that water exercise in particular is a proven, safe way to treat swelling associated with secondary lymphedema.

Rebounding (e.g. jumping up and down on a trampoline), for one, has attained something of akin to cult status, and anecdotal evidence at least suggests there might be something in it. According to its proponents, rebounding helps to stimulate and maintain the flow of lymph by the dual action of weightlessness and “double gravity,” in addition to providing passive lymphatic muscular stimulation throughout many of the major muscle groups.

From a theoretical standpoint, it makes a lot of sense. While there are plenty of enthusiasts, I haven’t been able to dig up direct (confirmed) links between rebounding and lymphatic health. That being said, there’s no doubt that rebounding is good for our general health, so I see no reason not to give it a go.

Stress, as it happens, can exhibit a direct negative effect on the lymphatic system. A study published a couple of years ago, for example, showed that “chronic stress restructures lymphatic networks within and around tumours to provide pathways for tumour cell escape.” Not an ideal scenario…

Consciously pursuing a limited stress lifestyle (and taking advantage of stress reduction strategies) is critical for promoting a robust lymphatic system that’s still capable of fighting infection, regulating fluid, and removing waste. As always, daily meditation is a big step in the right direction, along with regular movement (somehow we keep coming back to that), plenty of social interaction, and getting out into nature as much as possible.

Lymphatic massage, otherwise known as lymphatic drainage, was developed in Germany specifically for the treatment of lymphedema. While the massage technique varies depending on the location and nature of the lymphedema (lymphatic blockage leading to painful swelling), it generally involves a practitioner gently rubbing, stroking and manipulating the skin in directions that follow the structure of lymphatic pathways. In this way, accumulated lymph fluid is forced to drain from the area of swelling.

And as far as the literature is concerned, lymphatic massage produces tangible results. A 2015 review of six applicable trials found that lymphatic massage was at least moderately effective across the board, particularly when combined with compression bandaging or sleeves. A recent Chinese study also showed that a combination of lymphatic drainage massage and exercise were beneficial in the treatment of axillary web syndrome, a common lymphatic condition in post-op breast cancer patients.

An alternative therapy for lymphatic conditions like lymphedema that shows some promise (although peer-reviewed research is thus far lacking) is far-infrared treatment.

Disclaimer aside, the premise of infrared sauna treatment is thus: it purportedly stimulates mitochondrial function directly beneath the skin, which just so happens to be where some of the lymphatic system (and action) resides. In theory, more red light means more cellular energy, thereby encouraging more efficient flow of lymph and the possible treatment of conditions like lymphedema. With the cell-repairing, wound-healing, and other probable/confirmed benefits of far-infrared, it’s probably a therapy worth considering if lymph dysfunction is an issue.

Thanks for stopping by. Have you or anyone you know suffered from lymphatic issues? What treatments and/or lifestyle changes have been pivotal? Share your thoughts and questions below, and have a great end to your week, everyone.